He wrote: "The lesson that we can derive from the night of bloodshed that Paris experienced three days ago is that everybody will pay the price: anyone who participated in cultivating ISIS and supporting it, anyone who prepared the comfortable climate and environment for its ever-increasing expansion, and anyone who remained silent over its expansion and made no attempt to oppose it It began with the invasion of Iraq in The process involved humiliating the Iraqi citizen, wounding his dignity and allowing him to be killed according to his sectarian identity.

This process inevitably led [people] to arm themselves with the most benighted ideas that exist in the Muslim mind. Leaving aside the question of whether [these ideas] are compatible with the values of Islam or not, they provided them [the Iraqis] with suitable ground for confronting those who were crushing them.

The ideas of slaughter, burning, taking captive, destruction and accusing everyone of apostasy sprouted from here. The West rejoiced over the new Satan that it had created, aided it to the best of its ability, ignored the fact that it was beginning to gain powerful means of destruction, and exploited it as a bargaining chip to maneuver against the Arabs, pressure them and humiliate them. The U. S and the European countries did not learn a lesson from Al-Qaeda, [which is another] savage animal that the West spawned and cultivated in Afghanistan and that later [came back to] bite it in its territory Everyone will pay the price in the future.

The bill is in the mail. Prominent Saudi journalist Jasser Al-Jasser wrote in the daily Al-Jazirah that only a state could carry out an operation on the scale of the Paris attacks, and that the attacks were aimed at preparing public opinion in the West for giving top priority to the war on terror at the expense of the struggle against the Assad regime in Syria. He wrote: "Reports on the terrorist attacks that struck the [French] capital of Paris last weekend were not the first to use the term 'the army of the Islamic State.

Only nations with large armies, intelligence apparatuses, and special forces A terrorist organization, whatever its recruitment capability and number of supporters, could not have executed these seven perfectly coordinated attacks without the aid or cooperation of an intelligence apparatus of one of the countries known for their ability to conduct such operations Jerusalem Post Opinion.

In March , the crisis in Ukraine had reached a pivotal juncture. Thousands of people took to the streets to protest corrupt government leadership and violent crackdowns.

Dozens were killed and hundreds wounded. During these times of deadly conflict and chaos, it was critical for the media to try to get the story right. Subscribe for our daily newsletter. Hot Opinion. Most Read.

About Us. Staff E-mails. Advertise with Us. Ad Specs.

Cancel Subscription. RSS feed. The Jerusalem Post Group. Breaking News. As outrageous as this is, Western observers still find it difficult to determine where to come down on censorship of the press.

An impressive outpouring of disgust among regional media over the Beslan, Russia, terrorist act includes such reactions as Mundir Badr Haloum, a lecturer at a Syrian university, in the Lebanese daily al-Safir:. It is Islam that adorns television screens with body parts Islam—whether those who praise its mercies like it or not—is the foul odor of the putrefaction of Islamic history and its stench Indeed, we as Muslims produce terrorism, succor it, and praise it.

We condemn it only when forced to. Motivated by considerations of power, interests, and diplomacy, we wear a pained expression on our faces but in our hearts we rejoice at the brilliant success—a large number of casualties.

There have been some promising, unanticipated effects of the intense media competition in the region. Despite the tight hold patrons have over media scripts and programming, the scramble for market share has introduced an incentive for a few more daring media outlets to strive for more credibility in the market. The distinction between pan-Arab and national media has begun to divide along these lines: pan-Arab media clinging to the tried-and-true topics that excite Arab passions, and the national media beginning to search for niche markets and authenticity within them.

How independently these daring few can function depends on the culture as well as the ruling regime. Despite occasional arrests of journalists for attacking fellow Arab governments, Jordan is relatively open. Looking for a niche in a saturated market, Jordan Television has recognized that media outlets must compete with each other for credibility among their audiences. If stations are not credible in a saturated market, audiences change the channel. Credibility versus authority is a painful choice for these governments, which they may be facing all too soon.

This recognition may explain why some Arab governments appear to be taking steps toward cultivating more professional media organizations. In Saudi Arabia as well, the leadership sees itself caught between religious conservatives and reformers, creating a context in which the media have recently been allowed to publish reformist views that were not allowed in the past.

The relationship that binds media, patrons, and publics in oppressive political regimes is a curious dependence. This dependence appears to be loosening in the Arab world. No matter how they try, regimes can no longer control the information environment. Both the intense regional competition that satellite channels represent and the newfound confidence in their media power demonstrated by scooping most Western media during the Iraq war have fueled this dynamic.

The Arab satellite channels, like the genie let out of the bottle, leave us knowing more about what we do not know than what we do know about the degree and nature of their impact. The glass-half-empty view: Radical voices use the media effectively because their message is simple and easily transmitted in visuals. Accurate reporting requires a thoughtful viewer to sort out and assess its meaning. Comprehensive analysis, as opposed to commentary, also puts the burden of final judgment on the viewer.

Neither is favored by popular audiences, whether they live in a democracy or not. The glass-half-full view: Increased competition for regional audiences has made clear that electronic media can influence popular attitudes, and, conversely, media-empowered audiences demand and get the programming they want. This is occurring in the context of a flourishing trans-border media market that has not yet recognized itself as a social force. Reality: Although Arab media can put a modicum of pressure on governments regarding issues, they do not yet have the power to set the political agenda as the media do in the West.

The fact that representatives of Arab governments call in to television programs to defend their human rights records indicates some advancement, however. Without question, topics besides Iraq and Palestine are important to Arab audiences. Like people everywhere, Arabs care most about their own personal and local concerns, such as their schools and their neighborhoods.

Arab media should focus on these issues if they seriously intend to cater to their markets.


Reform in the media will happen as a process, not a decision by fiat; and with the tradition of governmental control, it will not occur easily. As an illustration, an editor of Jordan Television described assigning a reporter to cover a somewhat controversial story. The reporter delivered a report with absolutely no substance. We never did this before. Nor is the political environment sufficiently developed for meaningful reform. Despite more talk among Arab media about human rights violations, it would be too much to say that they are encouraging government accountability and democratization.

Some say such talk merely serves as a safety valve, rendering issues such as women, Islam, and ethnicity into entertainment. At this juncture, what can be said is that serious critical discussion of public policy issues is occurring more frequently than before the advent of the satellite era. Arab citizens have become accustomed to criticizing their own governments and to discussing issues more openly.

Arabs are also learning more about one another, becoming familiar with dialects other than their own. The new satellite channels and other media are a pivotal emergent factor in the Arab world. Inadvertently or not, they offer a forum for the Arab street to vent, formulate, and discuss public affairs.

They bring Arabs closer together, breaking taboos and generally competing with each other and their respective governments for the news agenda. All in all, Arab satellite stations have pushed ajar the door of democracy and flanked state monopolies on media. However qualified this assertion is, it does amount to a significant latitude when we say that al-Jazeera can talk about any topic except Qatar.

Arab audiences watch the news through a prism of individual and collective humiliation and resentment. To cater to those audiences, media portray the distorted reality created by this prism; and to compete with each other, they exaggerate the distortion. The pictures out of Fallujah do not in themselves necessarily incite Arab viewers against the United States, but reportage claiming that Americans intentionally target civilians does.

It confirms an already distorted view of reality. 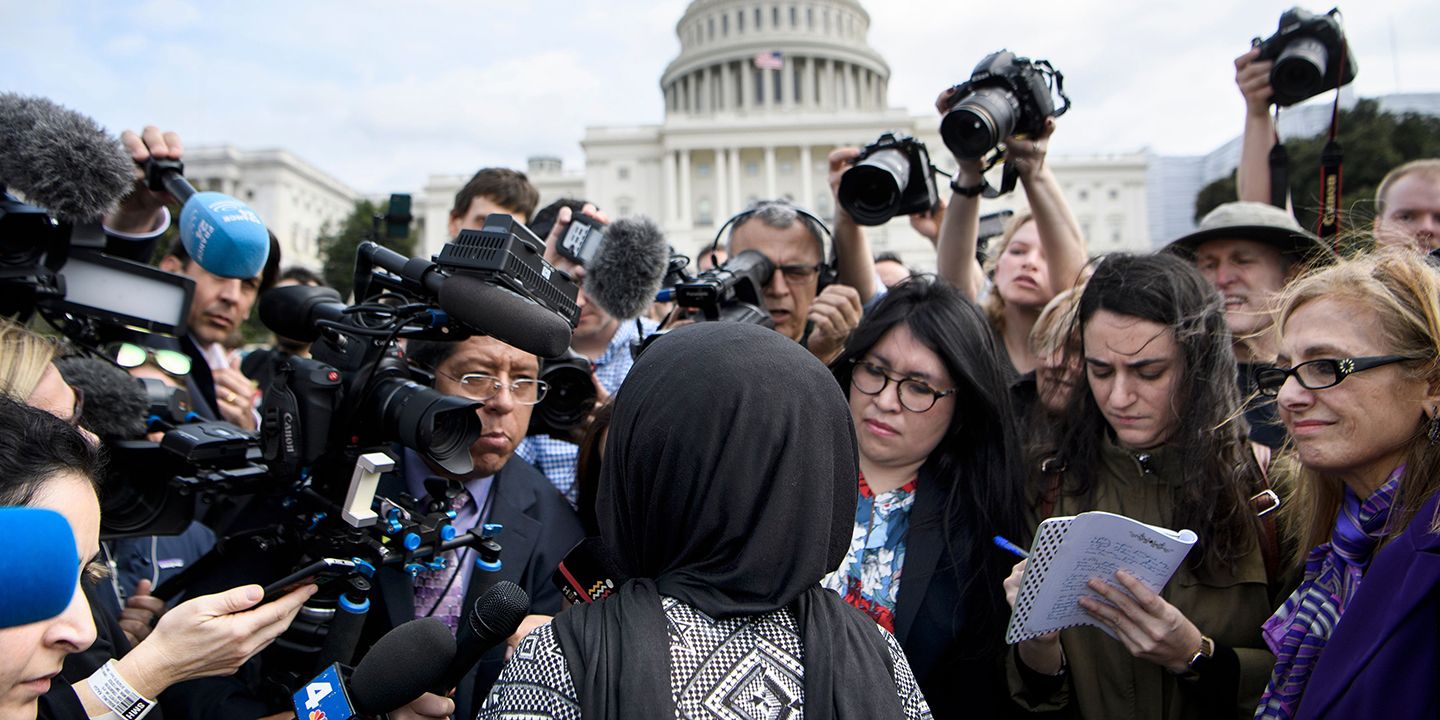 The stations play to a popularly held belief in order to up the ante in their competitive media environment. Such claims spur others to even more spurious allegations. This pernicious cycle ensures that moderation, much less reasoned truth, cannot be voiced. Although the new satellite channels are technical improvements over what preceded them, their lack of professionalism— accountability regarding objectivity and fourth estate responsibilities to the public—renders them suspect if not a genuine danger to the West.